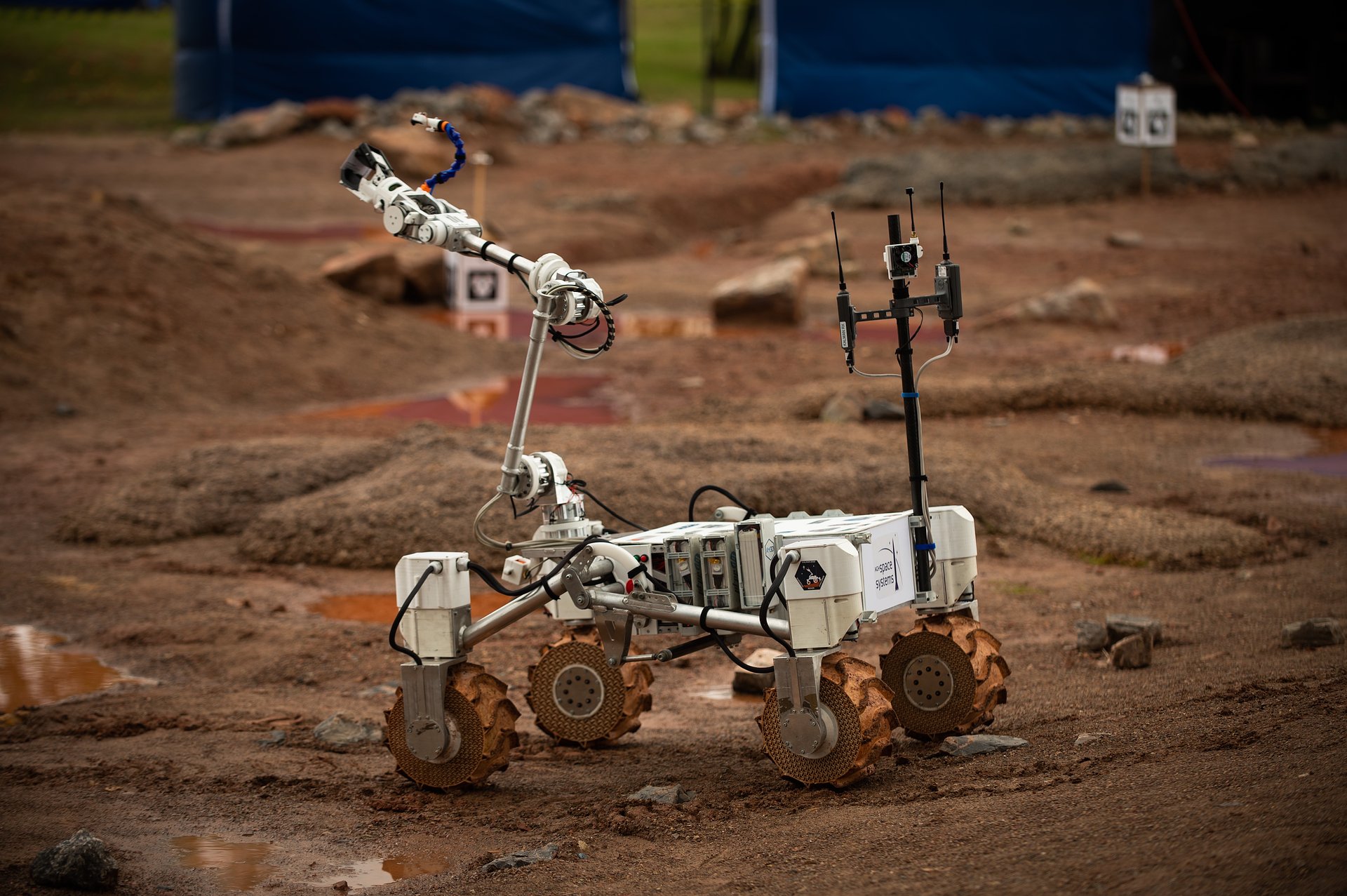 The dust has not yet settled on the Marsyard, and neither has the huge excitement after the finals of the 8th edition of the European Rover Challenge. The competition is still generating great excitement among the participants and organizers of the event. Soon another dose of attractions will await them – starting next Sunday, Europe's best rover, its designers, and the ERC organizers will attend the International Astronautical Congress in Paris. The visit is possible thanks to the invitation from the Polish Space Agency.

Last Sunday, the Kalman rover, created by the polish AGH Space Systems team, won the on-site formula at the European Rover Challenge. The competition included 30 of the world's best academic teams, competing both on-site and remotely. Tasks prepared by the judges reflected the challenges faced by engineers of actual Mars missions.
According to officials from the space sector, the winning of the Polish team in one of the largest space robotics competitions in the world, is not only a significant success, but also proves the great knowledge and professionalism of Polish students. Professor Grzegorz Wrochna, President of the Polish Space Agency, also evaluates the recent competition in this way:

"The Kalman rover, which recently won the European Rover Challenge, is proof that we are educating better and better engineers in Poland, who may transfer their experience gained during this type of competition later to companies in the space sector. I am very pleased that in just a few days, guests of the International Astronautical Congress in Paris will have an opportunity to see Kalman and meet its creators from AGH Space Systems at the stand of the Polish Space Agency. It's worth noting that we will also host other student inventions, such as TOLRECON – a lunar rock transport device also from AGH UST, or mini satellites taking part in the ESA CanSat competition" he says.

He is echoed by Professor Tadeusz Uhl, Director of the AGH Space Technology Centre:

"The phenomenal result of AGH Space Systems team at the demanding ERC competition is a success of the project-based education system that has been introduced at our university for many years. We hope that this victory will open up opportunities to send our AGH-prepared instruments to the Moon or Mars. We are aware that the path to the Moon will demand even greater efforts from us, but I think that with the best engineers in Europe, in terms of the construction of Martian vehicles, we have a good chance of accomplishing these plans”.

At the IAC congress in Paris, this year's ERC gold medalist will become the ambassador for all those involved in the event’s organization and its motto "we inspire a new generation". The young engineers will have an extraordinary opportunity to present their constructions to representatives of the most important institutions in the space sector from around the world and show how important it is for students teams to develop by competing in the well prepared environment.
The International Astronautical Congress in Paris will last until September 22nd. The AGH Space Systems team, as well as the organizers of the European Rover Challenge, will be present at the booth of the Polish Space Agency.
During the European Rover Challenge 2022, first prizes in the competition were awarded to AGH Space Systems (ON-SITE formula) and DJS Antariksh from India (REMOTE formula). The second place was taken by the teams: EPFL Xplore from Switzerland and Mars Rover Manipal from India, and the podium was closed by: ITU Rover Team and Project RED from Italy. This year, in addition to the three main prizes, extra awards were given for achievements in each category. The main prizes for the winners were sponsored by SENER and Mastercam. Additional prizes were presented on behalf of Thales Alenia Space Italy, Oprogramowanie Naukowo-Techniczne Sp. z o.o., and Pyramid Games – the publisher of “Occupy Mars The Game”.
Co-organizers of this year’s edition were: the European Space Foundation, Kielce University of Technology and Swietokrzyskie Voivodeship. The role of the Host City of the event belonged to the City of Kielce. The event was held under the honorary patronage of the European Space Agency, International Astronautical Federation and Polish Space Industry Association.
Partners of the event were among others: Polish Space Agency, European Union Agency for the Space Programme (EUSPA), International Space University (ISU), MathWorks, Polish Space Professionals Association (PSPA), Mars Society Polska and Kell Ideas (Leo Rover). The project is partially financed by the “Social Responsibility of Science” program of the Minister of Education and Science.